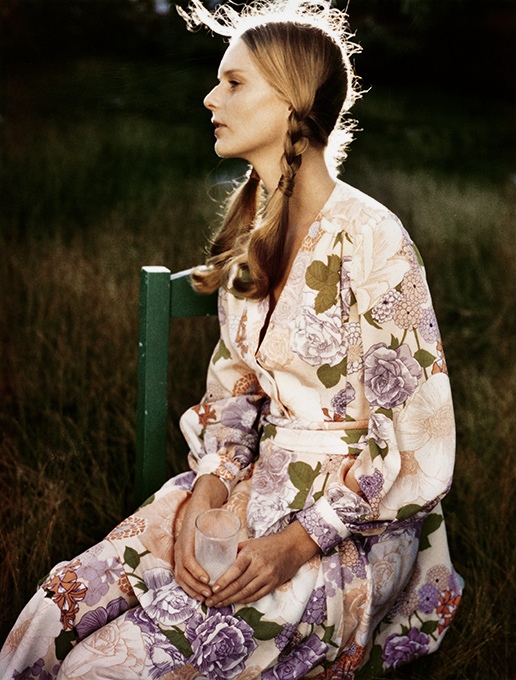 This series of images were shot on Polaroid film. The pre-press departments at the New York Times refused to publish the images because they thought the images were not good enough for full page bleed reproduction. I was not happy about the situation when the art department whispered the word retake.

Shifting into survival gear I called the man in charge of pre-press group and asked if he would prefer the images I shot on 8 x 10 film. "You have 8 x 10 film, that would be perfect."

I re-shot the Polaroid’s with an 8 x 10 Deardorff on a makeshift copy stand and subsequently all the images were published, including the cover which is the lead image that I call, Got Milk because the model Agneta would tease us with the milk moustache she created by dipping her upper lip into the glass of milk she was holding. Think of it, Got Milk shot in 1969.

The entire editorial section published on March 2, 1969 of the NY Times Magazine section was shot on Polaroid film and then copied on 8 x 10 Ecktachrome, The assistants in the studio would wink and refer to the shoot as, "The Sokolsky Polaroid Series."

After publication the quality of the printing got rave reviews, and the credit went to the 8x10 Ecktachrome. I’m still smiling, "The credit should go to Polaroid. In my view Polaroid film does not have much middle-tone, which gives it that almost painterly look and also contributes to a palette that somehow is easier to reproduce because of it’s inherent lack of contrast. One must also mention the poor paper quality of the weekly magazine sections at that time were prone to reproduce comic strips better than high resolution film.

To this day the powers to be at the NY Times are unaware that I copied the Polaroid’s on 8 x 10 film except for the legendary fashion editor Patricia Peterson.

I received a call from Pat in the Bahamas, where I was shooting a commercial with Ali MacGraw for Continental Paper. She wanted to know if I could shoot for the Times after I finished the commercial shoot. I explained that it was a difficult underwater shoot and I did not have my still equipment except for a Polaroid camera. With out missing a beat she said. “Then shoot with the Polaroid or I can pick up your cameras and bring them with me.” I always loved the look of Polaroid, and this was the opportunity. I told Pat that I would do the shoot for the times if I could shoot Polaroid and that I thought Ali would love to be part of it. A long silence and then Pat said "If you think it will look great on Polaroid. Shoot Polaroid."